Fractal Pattern Indicator provides unique and powerful insight for the turning point prediction. Therefore, it could be good supplementary tool to confirm Harmonic Pattern, Elliott Wave Pattern and X3 pattern in your trading.

As we have mentioned, the structure of Harmonic Patterns, Elliott Wave patterns and X3 patterns are made up from Retracement and Expansion Ratio. We have already covered this in details in these two articles.

Now, when you think about the structure of these patterns, they use the relative part of the prediction equation. It is because the retracement and expansion ratio are calculated by comparing the size of current wave and previous wave. Hence, they are relative only.

These patterns are good predictor of turning point. However, they still miss the absolute part of the prediction equation. We know that any good prediction would combine both relative and absolute terms. They are often considered as the best prediction.

At least, we can propose two methods to combine the Fractal Pattern indicator with Harmonic Pattern, Elliott Wave pattern and X3 pattern. We provide these two methods because these methods are simple and intuitive. However, this is not the exhausted list. You can always develop more sophisticated approach once you have mastered the basic methods. The two approaches include:

In method 1, you can simply combine Harmonic Pattern, Elliott Wave Pattern and X3 Patterns with Turning Point Probability at any Fractal Cycles. In this method, you will combine at least one Probability or two to confirm the appearance of Harmonic Pattern, Elliott Wave Pattern and X3 Patterns. Especially, we recommend you to watch the turning point probability in time. Because these patterns are detected by measuring the price movement only, the turning point of time can provide you the fresh information to confirm your patterns. 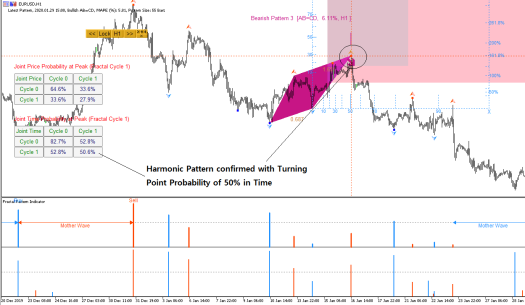 Another method is to confirm the Harmonic Pattern, Elliott Wave Pattern and X3 pattern is doing it with mother wave detection. Mother wave is the bigger wave nesting child waves inside. Its trading concept is similar to Elliott Wave. However, Mother wave detection is based on statistical probability, which is the absolute part of prediction equation, whereas Elliott Wave pattern is based on the relative part of prediction equation, that is retracement and expansion. Detection of Mother wave typically predicts the change in the market direction for the big price movement.

We have provided the article on how to set Mother Wave Detection in the Fractal Pattern Indicator. Below is the link for the article:

When you want to trade Harmonic pattern, Elliott Wave pattern and X3 pattern together with Mother Wave, then  you need to lower down the criteria for Mother Wave detection.

For example, if you set Mother wave detection like this:

You have only few patterns that can be confirmed with Mother wave. Hence, I recommend to lower down the criteria.

You can fiddle around with Mother wave setting in your Fractal Pattern Indicator. However, you might start with these probability first. 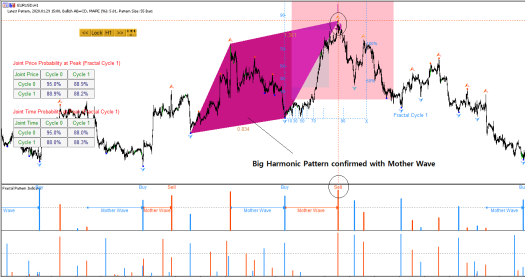 We hope that this article provide some insight on how to combine these popular Harmonic Pattern, Elliott Wave patterns and X3 patterns together with Fractal Pattern Indicator.

Do not forget that we provide Fractal Moving Average Indicator for free of charge as an additional supporting tool for your trading.

Here is the landing page to our  Fractal Moving Average Indicator (Free for everyone with some limitation for free users.)